A short form of the word facsimile, Fax has evolved through a number of versions to be a definition of an image (often an image of a document) sent over a phone network.

While the technology peaked in use from the late 1980s to the mid 2000’s, the ability to send an image over a wire predates Alexander Graham Bell’s invention of the telephone (technology similar to fax was in place in Europe around the time the US Civil War was ending), and is still heavily used into the world of the internet.

The First Faxes – Sending an Image Over a Wire

Alexander Bain is credited with inventing the first technology to send an image over a wire.

Alexander Bain, Inventor of the Fax

Working on an experimental fax machine between 1843 and 1846, he was able to synchronize the movement of two pendulums through a clock, and with that motion scan a message on a line by line basis.

The image projected to and from a cylinder. While it was able to transfer an image, it was of quite poor quality.

Bain’s patent, dated May 27, 1843, was for “improvements in producing and regulating electric currents and improvements in timepieces, and in electric printing, and signal telegraphs.”

Frederick Bakewell is credited with improving on Bain’s invention, creating the image telegraph that was very similar to today’s fax machine.

Bakewell replaced Bain’s pendulums with rotating cylinders that were synchronized, allowing for a clearer image through better synchronization. The image telegraph would pick up the image from the cylinder with a stylus, and place the image on the other cylinder through a similar stylus onto chemically impregnated paper.

Bakewell’s image telegraph was never considered a full “success” however it was a first important step towards a commercially viable way to send images over a wire.

First Commercial Use of Facsimile Technology

Credited with the first widely used invention similar to a fax would be Giovanni Caselli and his Pantelegraph. 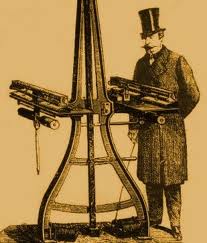 A combination of “pantograph” (a machine used to copy drawings and words) and “telegraph” (a system for transmitting messages over long distance wires), the Pantelegraph was the first invention that became more widely used for image transmission.

A major difference of Caselli’s Pantelegraph, when compared with Bain and Bakewell’s inventions, was that it used a regulating clock to keep the sending and receiving mechanisms working together. The biggest issue in image transmission was how to synchronize two machines in different locations.

With a successful demonstration in front of Napolean in 1860, the Pantelegraph started operation between Paris and Lyon in 1865 and extended to Marseille in 1867. For comparison with telephone, it was not until 1876 that Alexander Graham Bell received his patent for the telephone.

Through a number inventions in the late 1800s and early 1900s, different methods that were an improvement of Caselli’s technology emerged.

Shelford Bidwell is credited with using selenium cells connected to a telephone to send an image to a rotating cylinder. Bidwell called the results “Tele-Photography” as quoted in Nature’s 1881 edition and later was able to relatively accurately estimate the bandwidth and circuitry needed to send and receive images.

Edouard Belin is credited with the invention of the Bélinographe – an invention that was able to measure the intensity of light, impressing the image onto photographic paper. This technology was quite similar to modern photocopiers that use a CCC and laser technology to imprint an image. This invention was capable of sending photographs to remote locations across telephone and telegraph networks already in existence.

The Telautograph emerged as a way of sending signatures across distances. Signatures have always been a way of verifying ownership of a bank account and other identification, and the telautograph was built to solve the problem of signatures and distance. Telautographs existed up until more recent times, with the Telautograph Corporation being acquired by a number of companies up to it was purchased by Xerox in 1999.

Through the early parts of the 20th century, fax saw a number of twists and turns in its capabilities.

Emerging as one of the quickest ways to send an image over a wire, that capability moved to wireless with Richard H. Ranger sending a picture of President Calvin Coolidge from New York to London in 1924 through his Photoradiogram.

This was to some extent an extension of Arthur Korn’s technology that enabled a picture of Pope Pius XI to be sent from Rome, Italy to Bar Harbor, Maine in 1923, which was soon after adopted by the German police to transmit images of fingerprints across the country.

This invention turned into Radiofax (also known as Weatherfax or HF Fax), a method for sending a fax over a radio signal. Today, this system is still used for the transmission of maritime weather maps, and other similar functions.

The fax was also transferred over to HAM radio, with Rudolf Hell’s invention of the Hellschreiber, a method of transmitting data over long distance radio.

The 20th century also saw the invention of the Color Facsimile, as invented by Herbert E. Ives (who later became one of the more popular theorists in trying to counter Einstein’s Theory of Relativity).

In the early 21st century, 3D Fax became a method of scanning and transmitting 3-dimensional data. This project has come to be known as the Michelangelo Project, being used to scan 3d images of Michelangelo’s David and other historical pieces of art.

3D Fax was also a term given to infoimaging’s method of sending binary files (such as computer programs) over a fax machine.

Xerox’s 1966 Magnafax Telecopier could be connected to any telephone line and could transmit a letter-sized document in six minutes.

Japan became a leader in technological innovation in the fax market, bringing some compact inventions to the market. As competition in the market evolved, fax machines became smaller and quicker.

The Emergence of a True Worldwide Standard

This standard helped lead to a surge in fax technology, both as a national and international form of communication.

Through history, many technological advances have evolved in their own markets under their own systems that later on become difficult to connect and integrate. For example, electricity evolved in some markets as 110v, others as 220v. Telephones had their own “standards” across different regions. Cellular phone technology evolved in the same markets, but with technological differences between CDMA and GSM based systems.

Fax standards, however, have risen to the same standard through their history, making fax one of the first truly “universal” methods of communication.

Rise of the Computer-Based Fax

It was in 1985 that GammaLink introduced the first computer-based fax board, the GammaFax.

While the first boards were problematic in some instances, as documented by one 3rd part user FAQ, the GammaFax was a major was a major advancement, as it brought computers into the worldwide network of fax machines, which at the time was much more wide-ranging than the internet was.

While computer-based faxing led to activities such as broadcast faxing and massive junk faxes, it also brought the ability to manage and manipulate faxes to the smaller scale.

GammaLink was acquired by some different companies over the years, and today exists as Dialogic.

The 1980s also saw a rise of Xerox integrating Ethernet into some of their fax machines, adding it as a feature on their 8000 workstations in the 1980s.

Decline of the Machine and Rise of Online Services

As technology advances, each invention is eventually replaced with a newer, quicker, more secure option. The first decade of the 21st century has seen a major growth of the functions of the internet replacing the “everyday” fax machine.

While there are still many functions best accomplished by fax compared with the internet based equivalent, the business world has seen a major decline in the volume of fax transmissions, as volume moves to other internet based methods.

As fax still maintains a special function in a large number of businesses, there has been a rise of online fax services, built to merge the functions of fax with the convenience of the internet.

More Resources on the History of Fax

More on the History of Fax from Fax Authority: